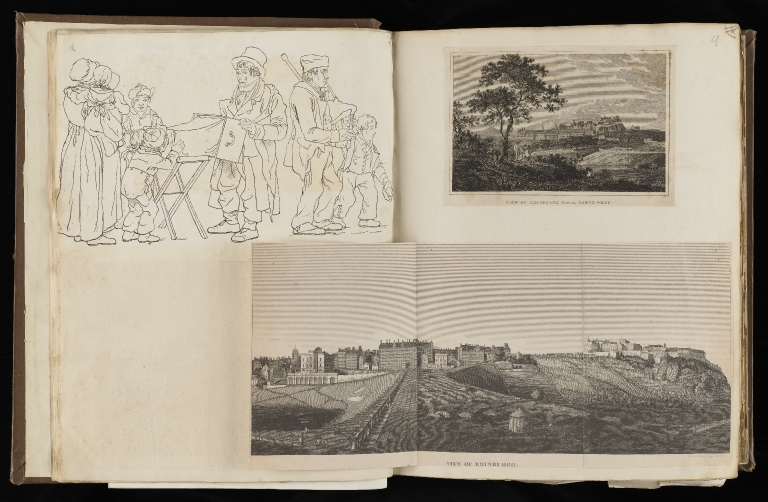 This volume, comprising 374 items mounted on 267 pages and covering the city of Edinburgh, is the first in this set of eight scrapbook albums compiled by the naturalist Adam White. Geographical coverage is largely restricted to the Edinburgh of White’s day: that is, to the then Burghs of Edinburgh (including the Old and New Town) and the Canongate.
Material relating to other areas within the city’s present-day boundaries – such as Holyrood Park, Restalrig, Merchiston and the Burgh of Leith – is to be found in White’s second volume, the Lothians.
Topographical and architectural subjects include eighteenth-century prints by Slezer (in later editions) Paul Sandby, Francis Grose, and John Elphinstone.
The more extensive nineteenth-century items reflect developments in reproductive technology – among them steel engraving and lithography – and the rapid expansion of print publishing. Examples include plates by T.H. Shepherd, J.W. Ewbank, William Bell Scott and James Storer.
These plates document modern urban developments, such as that of Calton Hill and its monuments; surviving buildings and antiquities including Holyroodhouse and Holyrood Chapel, and George Heriot’s Hospital; and lost buildings such as the Weigh House and Trinity College. Many of the images include lively depictions of contemporary street life.
The views also include original drawings and copies by White and his acquaintances, and one original Hill and Adamson calotype recording the recently erected Tolbooth Church.
In addition to these topographical subjects, this volume also contains a number of historical documents, amongst them a copy of the Articles of the Act of Union (1707) and no fewer than sixteen eighteenth-century ordinances of Edinburgh Town Council. Portraits include twelve etchings by John Kay; and there are six plates by Walter Geikie illustrating genre scenes.