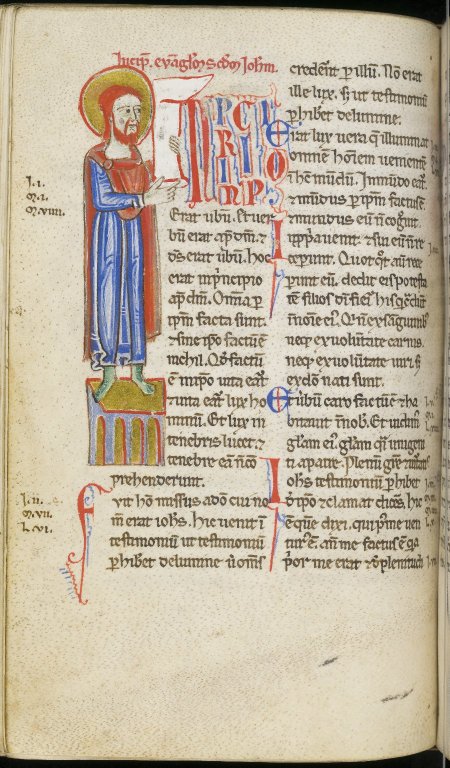 The manuscript contains the New Testament. The text between Book of Revelation chapter 17, verse 8 to First Letter of Peter chapter 2, verse 13 is missing. The manuscript includes the apocryphal Letter to the Laodiceans (f. 253r). A letter written "to the Laodiceans" or "from Laodicea" (depending on the different interpretation of the Latin text) is mentioned in the Letter to the Colossians (Col. 4:16); however, no Greek version of this letter exists and the Latin short letter, which appears in this manuscript and which is trasmitted by other copies of the Vulgate, is considered a forgery.
Before the text of the New Testament, there are a table of feasts and epacts, and a calendar which lists the celebration of the saints. The term 'epact' comes from the Greek for 'added' (the word 'days'” is implied). The epacts, or intercalated days, are therefore the days which should be added to a date expressed in the solar calendar in order to determine the same date expressed in the lunar one. The reason for this is that the lunar year is shorter than the solar one and their beginnings do not coincide. When the number of epacts reaches or exceeds 30, an intercalary month is added to the lunar calendar to bring the number of the epacts down to 0.
The calendar begins just after the table of the epacts. Each month is accompanied by a representation of the activities of that season and by the signs of the zodiac. The most distinctive names of saints present in the calendar are: 1 February: Severus (Bishop of Ravenna); 18 May: Fedentius (Fidentius); 25 May: Zenobius (Bishop of Florence); 5 July: Romulus (Bishop of Fiesole); 18 July: Rofillus (Bishop of Forli); 7 August:Donatus (Bishop of Arezzo); 20 August: Leuntius and Carpoforus (Leontius and Carpoforus, worshipped in Vicenza and Aquileia); 4 September: Marinus Martyr (Bishop of Rimini, then hermit on Monte Titano); 4 October: Petronius (Bishop of Bologna); 8 October: Reparata (martyr during the persecution of the emperor Decius, co-patroness of Florence); 10 October: Cerbonus (Bishop of Verona); 25 October: Miniatis and Companions (martyr during the persecution of the emperor Decius, evangelised when stationed with his troops in Florence); 7 November: Prosdocimus (Bishop of Padua); 9 November: Theodore Martyr (martyr worshipped in Venice); 24 November: Prosper (Bishop of Reggio); 1 December: Anxianus Martyr (Ansanus, patron of Siena).
The names of the Saints Reparata, Zenobius, and Miniato might indicate a Florentine provenance, but many other places in North Italy are also indicated. Some names of saints connected with Aquileia have been added to the calendar at a later time; this suggests that the manuscript went to that city. These additions are: 31 January: Translation of Saint Mark (Aquileia); 25 June: The finding of the body of Saint Mark (Venice); 12 July: Hermacorius (Hermagorus, Bishop of Aquileia); 14 March and 27 September: Feast and Translation of the Saints and Martyrs Felix and Fortunatus (Aquileia). Other additions and two corrections have been made to the calendar by two different hands.
Table of Special Feasts and Epacts: on f. 1v.
Calendar: starts on f. 2r.
Gospel of Saint Matthew: starts on f. 8r.
Gospel of Saint Mark: starts on f. 41v.
Gospel of Saint Luke: starts on f. 63v.
Gospel of Saint John:: starts on f. 100v.
Acts of the Apostles:: starts on f. 127r.
Book of Revelation:: starts on f. 164r.
Catholic Epistles:: start on f. 170v.
Pauline Epistles: start on f. 197r.
Writing Script bold and clear, by one hand throughout. It indicates and Italian provenance. Additions by two other hands have been made to the calendar.
Writing Verse and chapter initials and the first word of each book are alternately red and blue with penwork flourishes.
Illumination Book initials are either purely decorative after a rather unusual crude style, frequently introducing birds, or they contain single figures of evangelists and apostles. Saint Mark stands upon an unrecognisable lion (f. 41v), Saint John upon a building like a church (f. 100v). The colours used are green, blue, vermilion, and a dull yellow on burnished gold grounds. All the figures have vermilion-coloured hair.
Illumination Miniatures: these include a full-page miniature of a white monk on f. 1rv and pictures in the Kalendar, illustrating occupations of the months and the signs of the zodiac.
Illumination

The script is Italian, and the names of saints listed in the Kalendar connects the book with North Italy. It probably went to Aquileia.
The illumination on f. 1r, a full-length figure of a white monk with a halo, suggests that it originally belonged to a House of white monks.
Of later marks of ownership there is first a note of the content of the manuscript: Novum Testamentum Latinus. Manuscript in membrane [i.e. parchment] C. d. 2. Just below, in a slightly lighter ink and a more cursive hand, there is a description of the manuscript signed by Henry Drury, With many miniatures of the seasons, signs of the zodiac, and a profusion of large illuminated initials. At Drury's sale in 1827 the manuscript was sold to Cochran for £7.10 (see Sale Catalogue of Henry Drury. London, 1827, n. 3201). Laing notes that the manuscript is described in the Printed Catalogue of John Cochran, n. 16 (see Sale Catalogue of John Cochran, 108 Strand, London, n. 16), and the entry on the inner board, £14.14. (16), doubtless indicates the price paid for it by Laing at Cochran's sale.