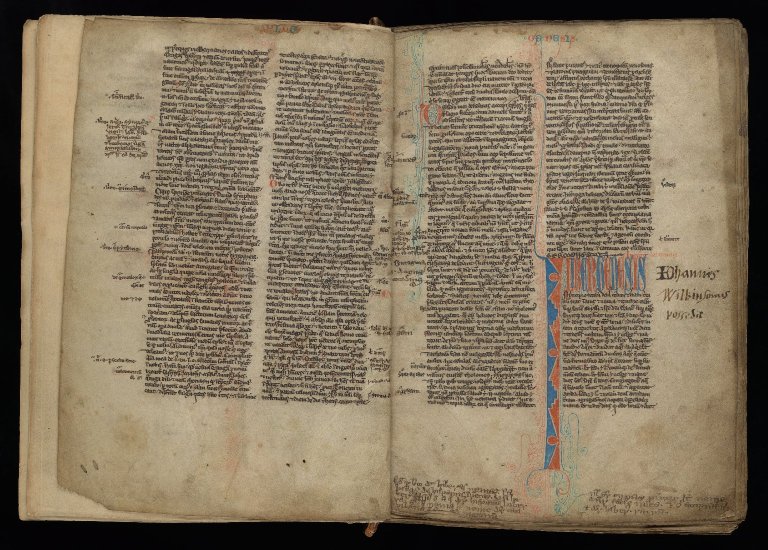 The presence of the apocryphal books of Esdras normally points towards an English provenance, as does also the version of Third Esdras which begins with the words Et egit Josias. On the other hand, the arrangement of books of this manuscript closely resembles that of three Bibles, one of which is known to be French and the other two conjectured to be (i.e. Fitzwilliam Museum, n. 1; Nicholas of Battle's Bible, belonging to H. Yates Thomson [possibly New York, Morgan Library, MS M.970]; and Hunterian Museum, Glasgow, n. 493).
There is an erased inscription on the bottom of f. 1r. Although it is not legible on the manuscript itself, a U.V. photograph stuck on the interleaf makes it possible to read it: Iste liber est de communitate fratrum ordinis predicatorum Karlii, concessus fratri Ricardo de Kyrby ad terminum vitae suae. quicumque alienaverit a dicto conventu anathema sit ('This book is from the community of the order of Friars Preachers [Black Friars] of Carlisle, loaned to brother Richard of Kyrby for his lifetime. May anyone who steals it from the said convent be cursed').
Later marks of ownership are as follows: on f. 3r, Johannis Wilkinsounis possedit ('John Wilkinson owned'); on f. 1r, Liber Caroli Lumisden ('Book of Charles Lumsden'); on f. 310 v, Liber Caroli Lummisden ministri verbi Dei apud Dudinstonam ('Book of Charles Lumsden, minister of the word of God at Duddingston'). Charles Lumsden was regent in the University in 1587 and 1588, was made minister of Duddingston by James Vi in 1611, and died in 1630. His library was estimated at 1200 merks (see Scott, H. [1915], Fasti Ecclesiae Scoticane, Edinburgh, vol. 1, p. 17). This manuscript was probably bought at his sale, as there is no record of its presentation to the Library. It appears in a catalogue of 1636.
The name Theophilus Wilkinson appears at the bottom of f. 215r.