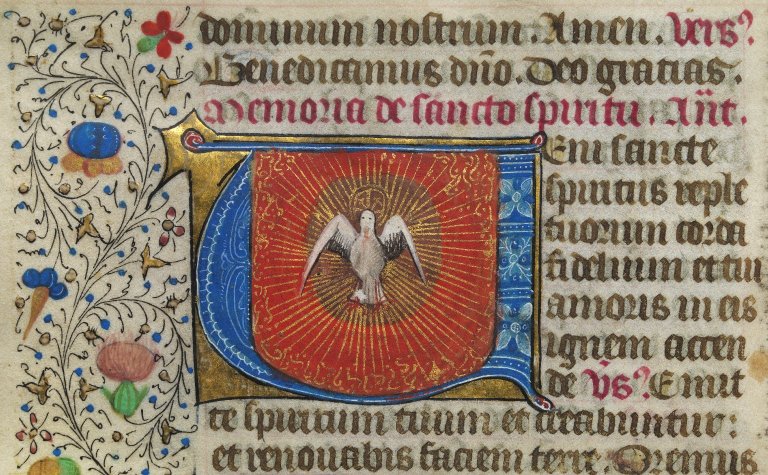 This is an English book, probably written for use in the diocese of Lincoln (see the saints listed in the Kalendar for this connection), but the illumination is French, and possibly the hand also. The erasure from the Kalendar of the name of Saint Thomas of Canterbury and of his suffrage from the Lauds (ff. 43v-44r) shows that the book was in England in the early part of the 16th century, as the cult of Thomas of Canterbury was a particular target of the Reformation: Henry VIII proclaimed him a traitor rather than a martyr and ordered the suppressions of all his images in 1538. The pencil additions, which include the names of Saint Donan (monk at Iona and founder of a monastery on the island of Eigg, Scotland; martyr) and Saint Giles, show British connections, but are by quite a modern hand.
There is record of a marriage on 20 April, A.D. 1559 hora x Crystofar Ken and ladye E. Belwyth ma. Certain additions with headings in French have been inserted on paper slips apparently in the 17th or 18th century. The same hand has inserted the Stabat Mater and reinserted Saint Thomas of Canterbury in the Kalendar; this scribe may possibly be the owner of the initials A. G. on f. 1r.

MS 40: Book of Hours (Use of Sarum), second half of the 15th century, MS 40. Edinburgh University Library Special Collections.