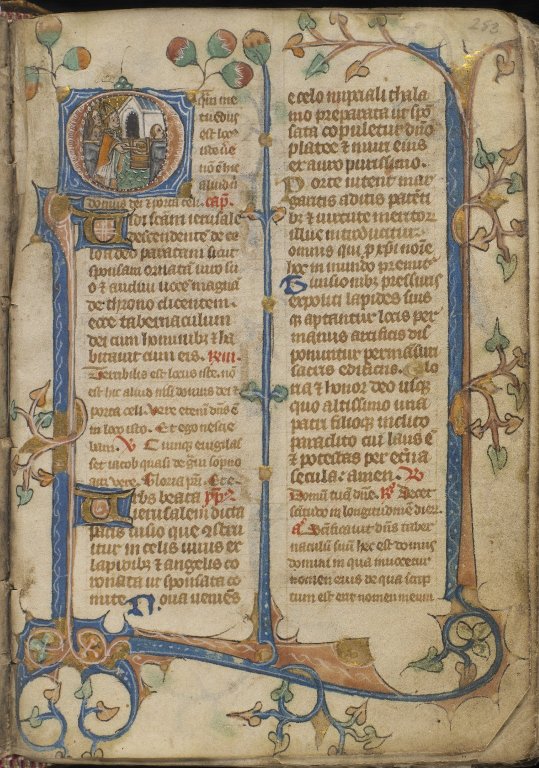 The Breviary is a liturgical book which gathers all the texts needed on any given day of the year to recite the Divine Office. It is mainly meant for members of the clergy (for example, bishops, priests and deacons) and contains detailed instructions for prayer at each of the canonical hours of the day. It is divided into distinct parts: a Kalendar, which lists all the most important feasts of the year and can be often tailored to fit a specific diocese or parish; two main cycles which include respectively all the parts of the liturgy which vary in accordance to a specific observance (proprium de tempore, 'proper of time' and proprium santorum, 'proper of saints') and those which are common to a specific category of saints, such as martyrs, confessors, virgins and so on (commune sanctorum, 'common of saints'); the Psalter, which collects all the Psalms that should be recited at each hour, each day of the week. Long rubrics throughout the breviary often give accurate instructions on how and when to recite specific parts.
This manuscript comes from England and follows the Use of Sarum. It does not contain a Kalendar and several folios are missing. In particular, leaves are missing after ff. 31, 41 (2), 67, 82, 95, 165, 169, 187, 193, 213, 221, 227, 231, 255, 291 (4), 313 (2), 335, 342, 380, 454, 460,. 495, 532, 538 (2), 590, 611.
Proprium de tempore: starts on f. 1r. The 'proper of time' (or temporale) includes all the readings related to the moveable feasts of the year, mostly regulated by Easter, which falls on a different Sunday every year. The liturgical cycle begins with Advent and ends with Trinitytyde (the longest season, from the first Sunday after Pentecost to the first Sunday of Advent).
Rules for Memoriae of Saints in Christmas week, with and without a Procession: start on f. 189r. These regulations are taken from the Sarum Costumary, a text which contained all the rules which the clergy should follow while officiating.
Benedictiones Matutinales: start on f. 290v. These are the blessings that should be recited during every morning service.
Service for Saint Richard of Chichester: starts on f. 291v (incomplete). A specific series of readings dedicated to this saint, who became bishop of Chichester.
[4 folios missing between 291 and 292].
Psalter with Canticles and Litany: starts on f. 292r. The beginning is incomplete: the text begins with Psalm 13 which is included in the first Matins. The Psalter contains all the Psalms recited during the Divine Office, divided according to each canonical hour and to the days of the week. The Litany begins on f. 368v.
Regulae de Historiis and other rubrics: start on f. 374r. The rubrics, all written in red, contains instructions for the recitation of the Divine Office; they are scattered throughout the Breviary, but sometimes a group of them can appear together, as here. One of the rubrics refers to liturgical reforms carried out by Giles of Bridport, bishop of Salisbury between 1257 and his death in 1262.
Proprium Sanctorum: starts on f. 381r. The 'proper of saints' (or sanctorale) includes all the readings for the feasts dedicated to specific saints; they are fixed feasts, as they fall on the same date every year.
Commune Sanctorum: starts on f. 603r. The 'common of saints' contains the readings which pertain to an entire categories of saints, such as martyrs, apostles, confessors, virgins, and so on. They include psalms, readings from the Scriptures, and short prayers (collects). In this manuscripts, the Service of Saint Fremund and the Collect for Saint Moluoc have been added.
Writing The script is of a good Gothic type.
Illumination Verse initials are alternately blue and gold, with red and purple penwork. Initials of sections (two line) are burnished gold on backgrounds of blue and lake. From their extremities spring cusped branches of blue, lake, and gold, ending in foliage or grotesque animal forms, and these extend down the margins to form partial or complete borders. Where there is a historiated initial these borders are rather more elaborate (e.g. stag and hound in lower margin, f. 5r). Tthere are fourteen historiated initials, and a number of others have been removed.

Although this is a Sarum Breviary, it has not been written for use within that diocese. It has no Kalendar, and the Litany follows the regular Use of Sarum. Prominence is given to Saint Richard of Chichester, whose office is not in its usual place (in the sanctorale), but is added at the end of the morning blessings, as a Solempne Festum ('solemn feast') of nine lessons. The translation of his relics is added on f. 380v, again with nine lessons (ff. 380v-382v). The book was, therefore, probably written for the neighbourhood of Chichester. The first page has a border with four shields, but they are now unidentifiable. The collect for Saint Moluoc, a Scottish addition, is of late date. There are no other marks.