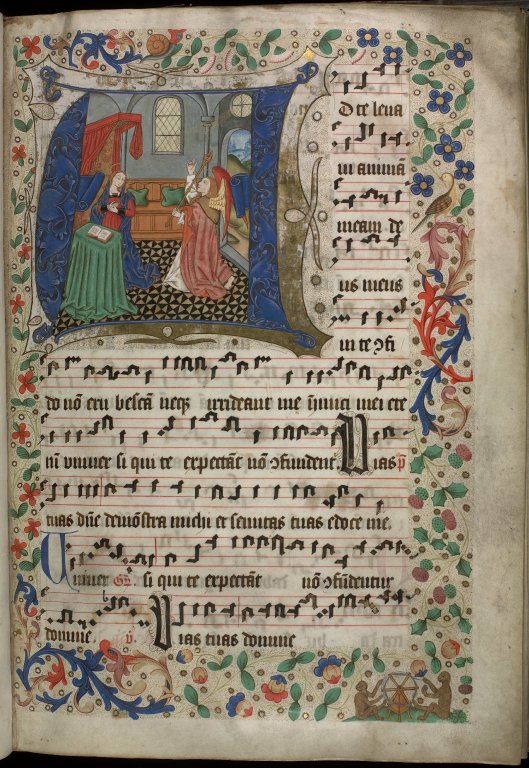 Latin with marginal annotations in Dutch.

Originally the Gradual must have been written for a House of Augustinian Canonesses in Holland. The canonesses were women who formed a religious community and followed the Rule of Saint Augustine, observing a very simple life, reciting the Divine Offices and often educating the young daughters of the nobility. From the Sequences (see Ulysses Chevalier, Repertorium Hymnlogicum) the text contained in the manuscript appears to follow the Use of Utrecht. The conjunction of Augustinian Use with that of Utrecht suggests the Congregation of Windesheim, a specific branch of the Augustinians which was at the heart of a movement of reform of the Church before the Protestant Reformation. The Augustinian origin is clearly shown both in the Sanctorale and in the Sequences, and the rubrics are all written for a nunnery. All evidence, both internal and external, points to Holland.
Apparently in the 16th century the Gradual has been adapted to Unreformed Roman Use, partly by marginal alterations, partly by additions on inserted folios or written over erasures. The Augustinian parts remain unaltered, however, and it seems possible that it passed into the hands of nuns following the rule of the Augustinian Friars, who would use Roman books.
Certain of the additions are, however, not Roman (as it is indicated in the contents) and their significance is not clear. The sequence Audi tellus audi is noted by Chevalier as found in an Antiphoner of Nôtre Dame de Lorette at Bois-le-duc (1491).
From a note on the inner board the book seems at some time to have been sold for £17.

Material: Vellum (with insertion in paper)

Binding: Original, oak boards covered stamped leather, 5 lead bosses on front board, 4 on back (one missing), 2 fine brass clasps of interlaced design, brass corners and back, 4 lead rests. The title Ave on vellum is let into a small brass frame on front board.