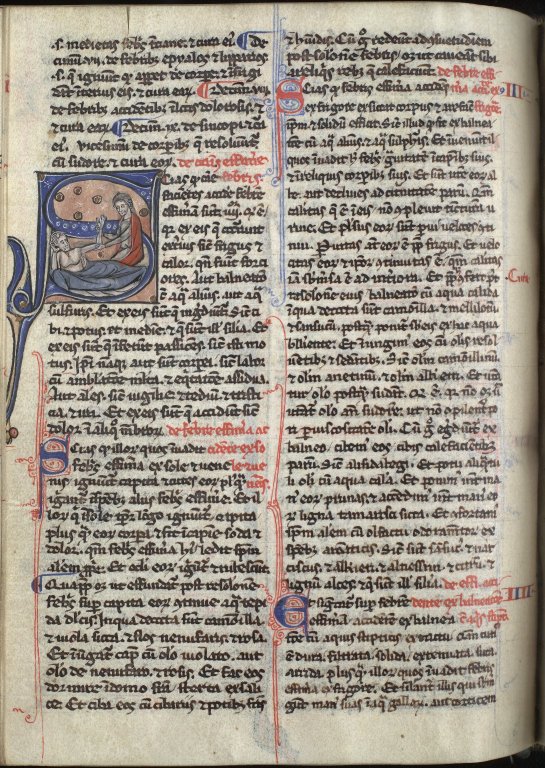 MS 170 is the Practica sive breviarium, a Latin translation from the 12th century by Gerard of Cremona. Gerard translated one of the two medical texts by 9th-century Christian physician, Johannes Serapion (also known as Yahya ibn Sarafyun, and Serapion the Elder). Little is known about Serapion, other than that he lived during the second half of the 9th century, and wrote medical treatises in Syriac. Through Gerard's Latin translation, which made the text accessible to medieval Europe, the 'Practica sive breviarum' became popular, particularly the last book of the treatise, which deals with antidotes.
F. 1r: A short preface to the treatise begins with Tractatus primus breviarii filii Serapionis medici translatus a magistro Gerardo cremonense de arabico in latinum. Inquit igitur Johanne. Incipiamus cum auxilio dei et bonitatc inspiracionis ejus...
Ff.1r-21r: Liber I.
Ff. 21r-43v: Liber II. First folio of book, and decorative/pictorial initial has been cut out.
Ff. 43v-59v: Liber III. First folio of book, including a pictorial or decorative initial, has been cut out.
Ff. 59v-87r: Liber IV. The first folio of this book, which contained a pictorial or illuminated initial, has been cut out.
Ff. 87r-111r: Liber V.
Ff. 111r-121v: Liber VI.
Ff. 122r-180v: Liber VII. The first folio of Book VII (including the pictorial initial) has been removed. The text ends with the close of this 7th book, with the line: Completum est postremum aggregati ex libro medicine editione Johannis filii serapionis Deo Gracias. Et nunc librum transtulit Magister Girardus cremonensis in toleto de arabico in latinum.
Ff. 181r-187r: Described terms, from 'Alhasef' to 'Zeditath'. The text begins with Incipiunt expositiones nominum arabicorum.... The final line of text reads: Expliciunt sinonima Magistri Gerardi cremonensi super serapionem.
The final four folios are unnumbered, and are paper (the rest of the volume being of vellum). They appear to contain some form of notes, in a much later hand. The text is Latin, perhaps recipes, but it is difficult to make out.
Writing Very well written in black lustrous ink in a hand which suggests Italian influence.
Illumination The illumination is more like French work (while the scribal hand shows Italian influence). There are good decorative and pictorial initials, but four of these last have unfortunately been cut out. The margins are badly cropped.

The provenance is difficult to determine. It would seem, from the script, to be either an Italian book or written in France under Italian influence. There are no marks of ownership. The number '982' and the name 'Serapio' are written in pencil in a modern hand on a fly-leaf. There are some medical notes on the paper fly-leaves at the end which look like Italian script of the 16th century.