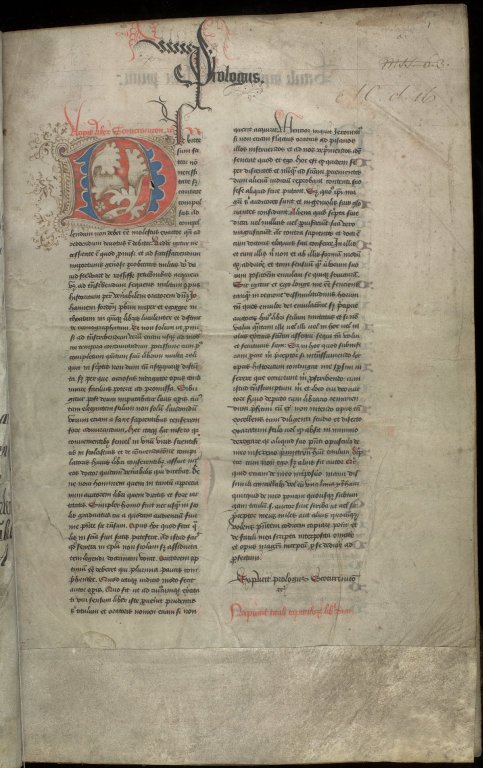 The bulk of MS 186 contains the 'Scotichronicon', by Walter Bower. Bower was a 15th-century abbot of the abbey of Inchcolm, on the island of Inchcolm in the Firth of Forth. He compiled an extensive history of Scotland, called the 'Scotichronicon'. In this narrative, Bower added some elements of his own and extended the account chronologically, but he declared in the text that his aim was to build upon the earlier work of Scottish history by John of Fordun, the 'Chronica Gentis Scotorum', from the late 14th century.
Bower's chronicle is an important source and perspective on history from and for medieval Scotland. As such, there have been several published versions of the text, the most recent edition being by D. E .R. Watt, published between 1987-1998. In 1759, Walter Goodall published his edition of Bower's Scotichronicon. He called his edition 'John of Fordun's Scotichronicon, with additions and continuation by Walter Bower', a title which confusingly ignores the fact that Bower's chronicle, while self-admittedly based on Fordun's work, is a separate and distinct chronicle. Particularly relevant to MS 186, Goodall primarily based his edition of the 'Scotichronicon' on the text of this manuscript in the Edinburgh University Collection.
The Scotichronicon begins on f. 1r of MS 186 with a prologue: Debitor sum irater non necessitate sed caritate compulsus... On f. 1v, Book I of the chronicle begins with Incipiunt tituli capitulorum libri primi.

Books II to XVI begin on the following folios:

Foliation and number of lines to a page