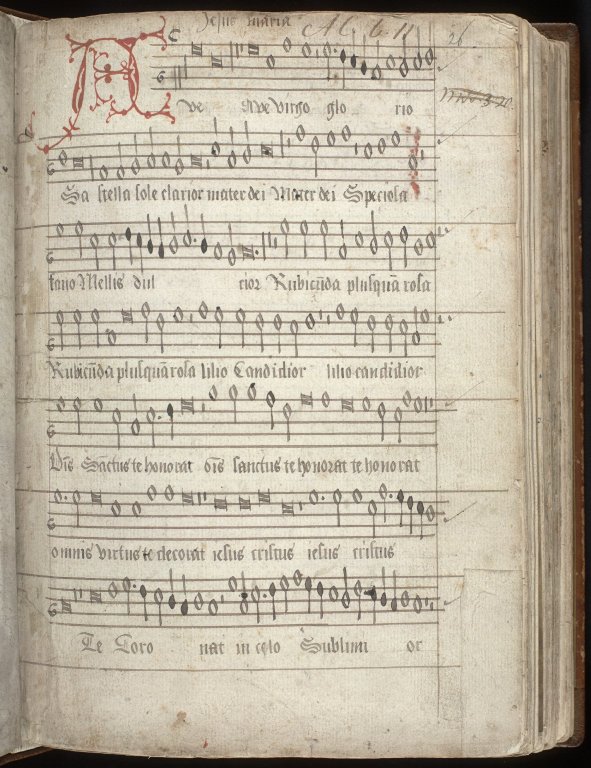 This manuscript contains music scores and lyrics for religious songs, and it is a good example of the polyphonic music of the 16th century. The book was originally 5 different volumes (one for each different voice) that were bound together, and now it has 6 folios of thick vellum at the beginning and end, and between each volume. Each volume has a similar lay-out: the first part has several motets and antiphons, mostly in honour of the Virgin Mary. The last part has one to three settings of the Ordinary of the Mass or missa tota, which is the set of songs sang in the Catholic liturgy (Kyrie, Gloria, Credo, Sanctus, Benedictus, Agnus Dei). Not all the songs are complete, and the number of voices employed varies between four and six, double parts being copied into some of the volumes. Some verses in English were added later on ff. 43v-45v.
Contents
Motets and Antiphons: Ave Virgo Gloriosa (first setting), Inviolata Integra et Casta, O Florens Rosa, Genetrix Virgo Mater, Virgo Clemens et Benigna, Felix et Beata Deo Fecundata, Ave Maria/Pater Noster (incomplete fragments), O Maria Stans Sub Cruce, Ad Nutum Domini, Regina Caeli, Benedicta est Caelorum Regina, Vidi Civitatem Sanctam, Descendi In Hortum Meum, Per Illud Ave Prola, Nunc Mater Exora, Infelix Ego, Ad Te Igitur Piissime Deus, Surge Petre, Si Diligis Me, Simon Petre, Ave Virgo Gloriosa, Salve Celeberrima Virgo, Haec est Illa, Te Sanctum Dominum, and Cherubim Quoque ac Seraphim.
Masses: One complete Mass for five voices and incomplete fragments of two other Masses.
Writing Neither hand nor ornament are particularly good. They closely resemble the Scone Antiphonary (National Library of Scotland, MS Adv. 5.1.15).

This book is said to have been used at Dunkeld Cathedral. It very strikingly resembles a much larger manuscript in the Advocates Library of the National Library of Scotland (MS Adv. 5.1.15), known as the Scone Antiphonary, which belonged to a canon of Scone, 1513-46, and which is often considered the earliest book of church music of Scottish composition. On f. 103r is written, Robert Dowglas with my hand at the pen William Fische, and the verses on ff. 43v-45v may be by the same hand. The volumes are numbered by Laing. There is no clue to how the manuscript came into the Library.