MS 202: The Regiment of Princes, by Thomas Hoccleve, 15th century 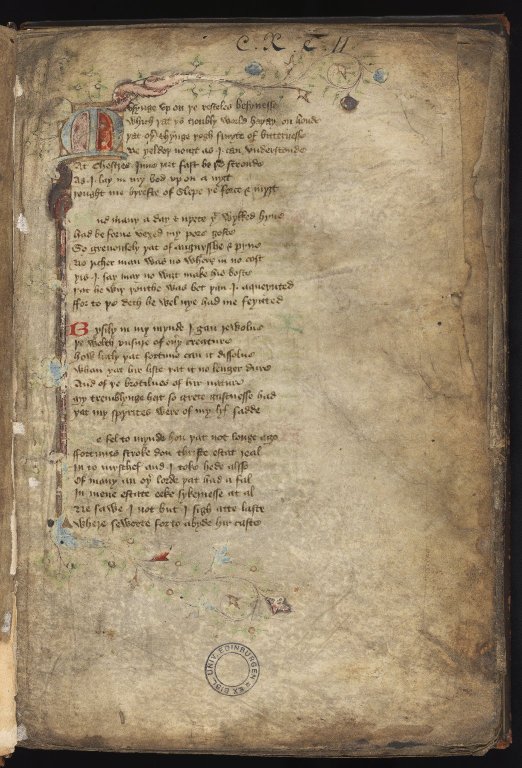 The Regiment of Princes by Thomas Hoccleve (MS 202)

Thomas Hoccleve was a English poet and goverment clerk in the Office of the Privy Seal in the first quarter of the 15th century. Hoccleve was author of several other works, but that contained in MS 202 is his 'Regiment of Princes', dedicated to Prince Henry, the future king Henry V. Given that the poem is dedicated to Henry V as 'Prince', and from some internal evidence in the poem, it is possible to date the composition of Hoccleve's original 'Regiment of Princes' to c. 1410-1413. MS 202 is dated to the first part of the 15th century, so it was therefore produced very soon after Hoccleve's original.
The 'Regiment of Princes' was Hoccleve's most popular and successful poem, and it survives in roughly forty-three manuscripts, a very high number for Middle English poems. Hoccleve's 'Regiment' belongs to the genre of advice texts for princes, and it was inspired by the earlier work of 'De Regimine Principum' by Aegidius Colonna (Giles of Rome). Hoccleve's work, like the genre into which it falls, instructs the reader (the prince/ruler) on virtue and vice.
Hoccleve's 'Regiment of Princes' in MS 202 begins on f. 1r with the line Musing upon [th]e resteles besynesse.... The poem is incomplete in MS 202, and ends (eight stanzas short) on f. 96v, with the words: To stynt of werres [th]e dampnable wone...
Writing A very typical English hand of the first half of the 15th century, with plain blue and red capitals.
Illumination One illuminated initial with partial border of feathery branch work, much rubbed and also typical of the 15th century.

The manuscript is considerably soiled, and lacks at least two folios at the end.

A very typical English manuscript of the 15th century. It contains some 15th century scribbles on a fly-leaf mainly in English, but no names or marks of ownership. The first library shelfmark is an 18th century one, and it is not known how the manuscript came into the Edinburgh University collection. David Laing annotates it on the paper fly-leaves at the beginning and end, and refers, for the missing stanzas (missing last two folios), to a similar complete manuscript in the National Library of Scotland (Adv. MS. 19.1.11).

Title given to the manuscript in Catherine Borland’s catalogue: Occleve de Regimine Principum.

The manuscript is considerably soiled, and lacks at least two folios at the end.

Secundo folio: Alasse thought I
Foliation and number of lines to a page: ff. 96, 4 seven-line stanzas to a page.