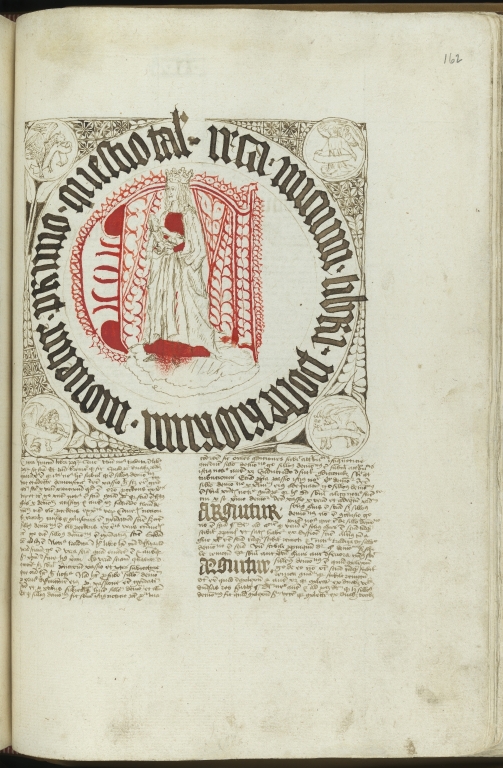 This manuscript proper was written in 1477 in Leuven by Magnus Makculloch. It contains his notes in Latin on lectures about philosophy and logic by Petrus de Mera, Andrea de Alchmaria, and Theodricus Meyssach, including extracts from Porphyry and Aristotle (ff. 1r-58v), and commentaries on those texts by the aforementioned lecturers (ff.59r-200r).
On the fly-leaves and blank pages, a later hand has added a variety of texts in Scots, including poems by Henryson and Dunbar, as well as anonymous verses. These texts were probably not added until the early 16th century.
The texts are described separately, under MS 205/ff. 1r-200r and MS 205/ff. Scots.
Writing It is written in a fair, rather minute hand, with the headings and quotations in large, black, Gothic script, and ornamental headpieces to the books in red and black, the initial being in the centre and the opening sentence written round it in various ways.
Writing The script of the additions is probably early 16th century rather than late 15th century.
Illumination In some of the headpieces there are shields bearing the arms of Scotland, England, France and Flanders, with one or two other coats, possibly of Flemish origin (see ff. 12r, 41r, 176v, 177r, and f. 189r). There are also one or two attempts at pictures: a Virgin and Child (f. 162r), Coronation of the Virgin (121r), the evangelistic emblems (f. 59r), with other sketches, mostly of human heads, drawn throughout.

The MS. was written in Leuven by a Scottish student named Magnus Makculloch at various times during the year 1477. Abundant evidence for this is found in colophons noted in the "Contents" section for the entry MS 205/ff. 1r-200r (see ff. 17r, 85r, 120r, 136v, 154v, 177r, 181r, 198v, 200r). The colophon on f. 120r contains per me Magnum Makcullocht de Rossia in lovanio residentem, which may be compared with a similar colophon in the manuscript of Fordun (B.M. Harl. 712) which reads per me Magnum Mackullochc clericum Rossensis Diocesis. There is little doubt that they refer to the same person, namely, Magnus Makculloch, clerk to Archbishop Schevez, who transcribed two manuscripts of Fordun (MS. Brechin Castle and MS. Harl. 712 – see William F. Skene, The Historians of Scotland Volume I: Johannis de Fordun, Chronica, Gentis Scotorum (Edinburgh: Edmonston and Douglas, 1871), pp. xv-xviii), and is mentioned in error as 'author' of the last eleven books of the history in a late inscription in the Edinburgh University manuscript of Fordun (see MS 186).
On f. 136v the colophon has per me Johannem de tayn alias Makculloch, and on f. 202v we find the name Mabinus Makullog. It has been suggested that these probably refer to relatives of Magnus who were in Louven at the same time (see G. Gregory Smith, Specimens of Middle Scots (Edinburgh: William Blackwood and Sons, 1902), lxvii).
The chief interest of the manuscript, however, is to be found in the additions written on blank leaves and fly-leaves, which include three poems of Henryson and one of Dunbar. They are by a later hand, possibly of the early 16th century. From the colophon on the third fly-leaf, to the Tale of the Cock and the Jewel, we learn that the writer's name was John (nomen scriptoris Johannes pienusamoris). It is possible that he may have been the (I purde whose name appears more than once as owner of the volume (again, see Smith, Specimens of Middle Scots, lxvii) and who probably lived in Brechin (see the first fly-leaf) . The name John Purde appears in the Chartulary of Brechin, but under dates 1577 and 1585-6 (see the Registrum Episcopatus Brechincnsis, volume ii, pp. 338, 351, 356).
This inscription could also read nomen scriptoris Johannes plenus amoris.
Laing acquired the manuscript in 1854.

Secundo folio: predicamentorum
Foliation and number of lines to a page: ff. 202+3 fly-leaves, in double columns of unequal length.