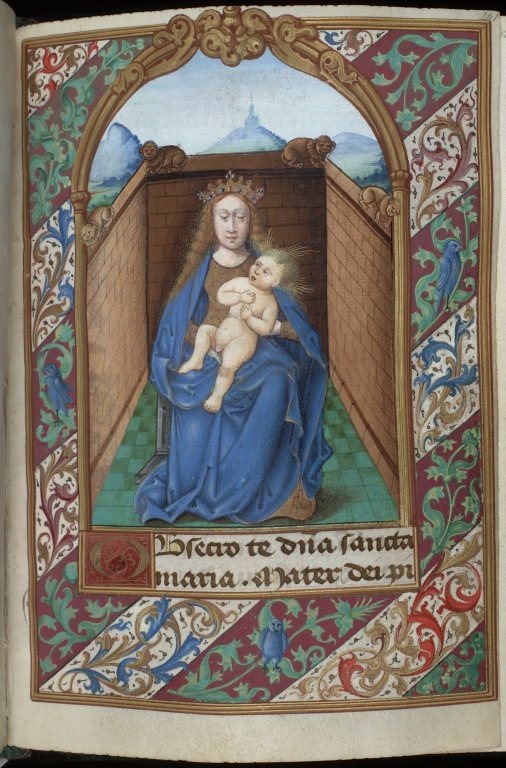 The coat of arms of Anne of Brittany, Queen of France, is inserted into the first border. She married, in 1491, Charles VIII of France, and in 1499 his successor, Louis XII. External evidence suggests that the book must have been written for her after her marriage with Louis XII.
The book seems to have been in the possession of a family named Remiel throughout the 17th century. The inscription on f. 1, Le septieme Novembre 1596 sont les prcsentes hemes venues en partage au Balthasar Remiel Chancellier de Ma [. . .] des Mens delaisses par feu Jeanne Bertrand sa mere grande, lesquelles le diet Remiel a donnS a Barbe Remiel sa fille aisnee pour souvenance de la deffunctc et affin quelle au memoire dicelle en ses praves [?] le diet viie Novembre an susdict 1595, E. [?] Remiel, records the way in which it came into their possession, and the carefully erased notes in the Kalendar record its possession by the Remiels as late as 1682. The historian Jean-Luc Deuffic has identified 'Balthasar Remiels' as being 'Balthasar Rennel'.
This manuscript was lot 138 in the sale of John Boykett Janman at Sotheby’s, June 13, 1864.
Laing records that it was given to him by Robert Mercer, Esq., as a keepsake. The sale entry on the flyleaf, which contains a not very accurate description of the MS., gives its price as £15, 15s.

Regarding the name of the family 'Remiel', who seem to have possessed the manuscript throughout the 17th century see the following blog post that refers to this manuscript. The blog is in French, written by the historian Jean-Luc Deuffic. He corrects the name to Balthazar Rennel. http://blog.pecia.fr/post/2015/11/08/Un-livre-d-heures-restitu%C3%A9-%C3%A0-Balthazar-Rennel%2C-pr%C3%A9sident-de-la-Chambre-des-comptes-de-Lorraine-%28Edinburgh-University-Library%2C-Laing-15%29