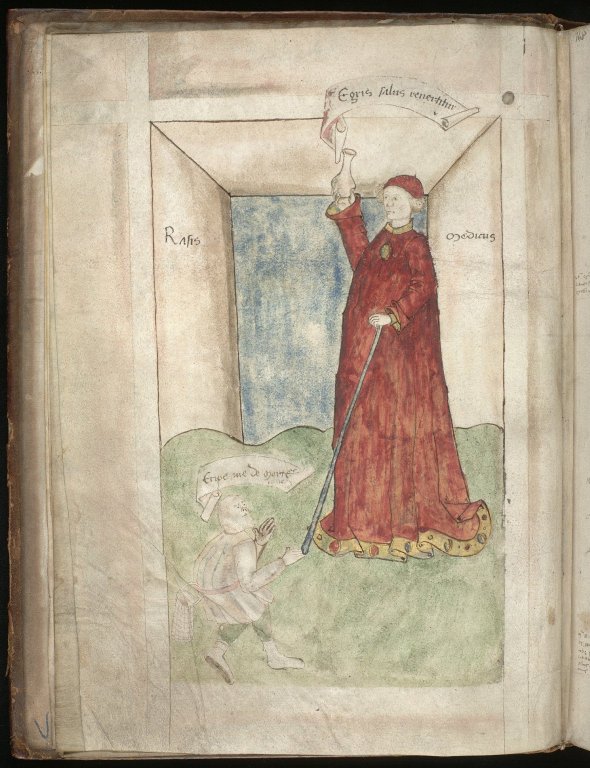 Contains six medical texts, and recipes inserted at a later date. The whole volume is written by the hand of Robert of Sherburn, with the exception of the recipes, written by Francis Cox.
ff. 1v-2v: A Tabula to the volume, in the hand of Robert of Sherburn, and an ilustration of a physician and patient (described under 'Scope and Contents-Illumination').
Ff. 3r-37r, ff. 41r-44r: 'Expositio cum questionibus super textu Rasis in 9o Almansoris'
Ff. 40v, 83v-87r, 106v-108v, 139v-140v: Recipes (later insertions) in the 17th-century hand of Francis Cox
Ff. 45v-70v : 'Regimen sanitatis Salernitanum'
Ff. 71r-83v: 'Liber urinarum' by Isaac Judaeus, translated by Constantinus Africanus
Ff. 87v-97v: 'De pulsibus', by Aegidius Corboliensis
Ff. 97v-106v: 'Super Hippocratis Prognostica', by Aegidius
Ff. 111r-139r: Miscellaneous suppositions and questions, by the hand of Robert of Sherburn.
The texts and later recipes are described separetely, under the folios and titles listed above.
Writing The 15th-century hand of Robert of Sherburn is very minute and beautiful. The second hand, that of Francis Cox, is from the 17th century.
Illumination There are a few ornamental initials, and a full-page illustration at the beginning.

Inscriptions have been erased on f. 1r, but In moste humble Wyse complayinnge unto yowre remains. A contemporary signature on f. 143r reads: Grocynn Schyrburn. The volume seems originally to have been a collection of medical treatises in the single, late 15th-century hand of Robert of Sherburn. The addition of recipes was made by a Francis Cox sometime in the 17th century. David Laing seems to have acquired the volume in 1865.

Title given to the manuscript in Catherine Borland’s catalogue: Medica Secundum Scholam Salernitanam.

Duke Humfrey and English humanism in the fifteenth century: Catalogue of an Exhibition in Bodleian Library, Oxford Oxford, 1970, no. 23.

Material: Paper, but f. 1 and fly-leaves are vellum.